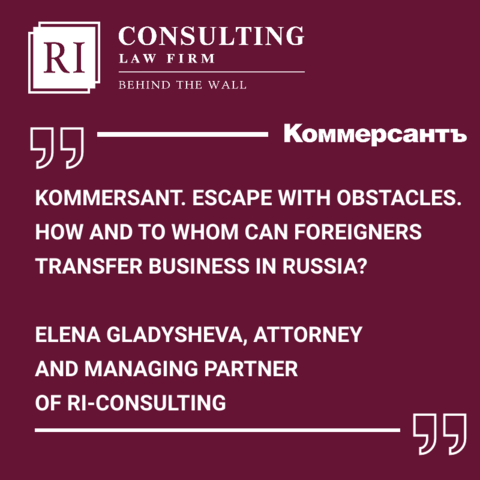 Against the background of harsh sanctions imposed against the Russian Federation in connection with the military actions in Ukraine, a number of foreign companies announced the withdrawal from the country, the suspension or "transfer" of business. Kommersant discussed with lawyers what this may mean, what legal mechanisms exist, and whether foreigners can create conditions in advance to return to the Russian market.

After the start of the military operation in Ukraine, many international companies announced that they were suspending operations in Russia or quitting altogether, with new names appearing every day. Some, however, have specified that they plan to "hand over Russian business".

In particular, on March 15, British tobacco company Imperial Brands (Davidoff, Richmond, and Gitanes brands) explained that it had "begun negotiations with a Russian legal entity to transfer the business in Russia," would take measures to maintain "uninterrupted operations" of the company, and would continue to pay salaries to employees "until all transfer processes are completed."

British American Tobacco (BAT, Dunhill, Lucky Strike and Rothmans brands) also announced its withdrawal from Russia: "We have begun the process of quickly transferring our Russian business in full compliance with international and local laws. We will continue to pay the salaries of our 2,500 employees and do everything we can to make sure they have jobs in the future." As Kommersant found out, the business will be managed by BAT's distributor and longtime partner, SNS Group, which promises to maintain production and supplies at the same level.

Philip Morris International announced on March 24 that it is considering restructuring options, including the possible transfer of assets. On March, 28 the Dutch brewery company Heineken also announced its search for a new owner for the Russian business.

Managing Partner of RI-Consulting Elena Gladysheva on what risks arise for Russian business beneficiaries (who are under Western sanctions) when transferring their assets to "nominees" (top managers of the company, etc.) and what are the ways to protect their interests, so that then the nominee does not cheat and or appropriate the asset? What disposal/transfer options are possible? Will foreign companies from unfriendly countries (see the updated list of the government) receive permission from the Rights Commission to sell their shares in Russian subsidiaries or stakes in LLCs, to repo or option transactions or to withdraw from shareholders/participants? In which case are there more chances to approve such a transaction? And will foreign companies even apply to the Rights Commission for such permission or can they ignore this requirement? If they ignore it and sell shares/participatory interest without approval, what are the consequences? Will it be possible to cancel the sale or not?

AG'S OPINION PIECE THAT REQUIREMENTS TO THE PARTICIPANTS OF STATE PROCUREMENTS SHOULD NOT BE EXCESSIVE. THE SUPREME COURT HAS ELIMINATED THE LEGAL AMBIGUITY RESTRICTING COMPETITION

Elena Gladysheva, Managing Partner of RI-Consulting, Advocate of the Moscow City Bar..In a market economy and free competition, the Federal Antimonopoly Service of the Russian Federation closely monitors any violations and restrictions of the free market. Such violations occur regularly... 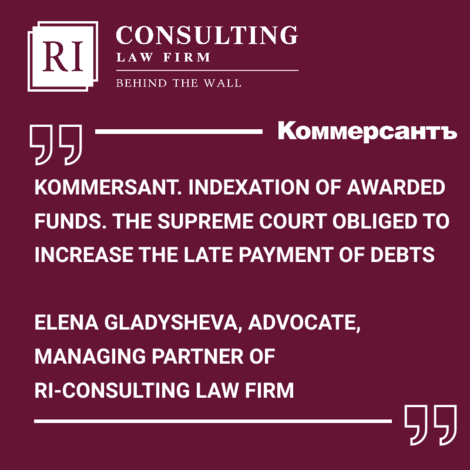 KOMMERSANT.INDEXATION OF AWARDED FUNDS. THE SUPREME COURT OBLIGED TO INCREASE THE LATE PAYMENT OF DEBTS

The Supreme Court of the Russian Federation (SC RF) has recognized as fair and necessary the right of claimants for indexation of the sums awarded to them in case of delay of payment by the defendant. Now the courts should not refuse such claims, even those filed before the June amendments to the... 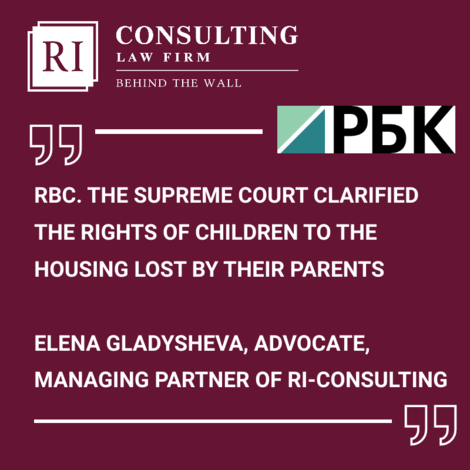 RBC.THE SUPREME COURT CLARIFIED THE RIGHTS OF CHILDREN TO THE HOUSING LOST BY THEIR PARENTS

The Supreme Court has protected the rights of children to housing lost by their parents. A minor does not lose the right to use housing even if his parents have been deprived of this right by a court decision. This was the conclusion reached by the judicial panel for civil cases of the Supreme Court...